There has been some mixed reports on the feasibility of traversing the northern route this early – unfortunately I haven’t spoke with any motorcyclists who have done it yet. I decide to give it a try and head out of Dushanbe around 8:00am.

I’m not sure why, but there are several military checkpoints along this route. The checkpoints are stationed by a couple of young men (18 – 25), with no vehicle our housing; I assume they’re sleeping in the guard shacks, similar to old fire lookouts in the northwest US. The route is permit only, which I’ve secured from the authorities in Dushanbe. The first checkpoint is stationed where the tarmac ends and the road turns to dust. The guards are clearly happy to see someone, check my passport and permit before sending me on my way.

The road is a typical busted up 2 track filled with potholes, stream-beds and rock gardens. There are several water crossings throughout the day with the deepest being about 2’. Water crossing can be really tricky, depending on the depth, size of rocks and speed of the water. There is no room for error, as if I dump the bike in the middle of the crossing – there’s nothing to do until help arrives, then a very lengthy process of dismantling the machine to dry out all of the electrical and combustion components. These crossings make me really nervous – all it takes is one large rock I don’t see to send me over, there is very little room for error. The longest crossing today lasted about 200 meters, where a section of road had become the new creek bed.   With no way around, I head into it with some trepidation. I made a clean run through the section and came out the other side with a certain amount of relief.

The section of road leading up to the summit is probably the most challenging of the route, as it’s still muddy from the continued snowmelt.  There is at least one clean line up the entire section, but get outside of this line and it can be tough to keep the bike upright in the mud. The big adventure bike like I’m riding can be almost impossible to control on a flat muddy surface, let alone an incline. I keep it under control up the road and make it to the summit after a couple hours of battling the slippery surface. Unfortunately this wasn’t the case for a couple who didn’t have such good luck about halfway up the route. The pair are from Kazakhstan and doing a similar tour as my own. One of the guys lost control and shot his bike off the side of the road and down the mountain.   Luckily he didn’t go with it and his bike somehow stopped about 100 meters down the mountain. They waited for a local to arrive who went for help and came back with all of the rope they could find, which ended up being enough to slowly pull the bike back up to the road surface.
When I arrived, they had just finished putting the bike back together as best possible and were going to try and ride it out. If this didn’t work, his partner would go back to Dushanbe and try to hire a flatbed truck to come up and retrieve the machine. Regardless, they were now on a different type of adventure. I offered as much assistance as I could, which was very little at this point, so I moved on.

I had to use my reserve fuel canister at the summit and hoped it would be enough to get me to the next village that had fuel – it was.   The “attendant” filled my bike and reserve from a 50 gallon drum of fuel with a bucket and funnel. As much as he tried to keep it clean, I ending with fuel all over the place. Happy and thankful to have found fuel, I headed out upriver to the next track I’d be taking.

On route this evening, I smashed a pothole (still traveling on a busted up road surface) and ripped a sidewall on my front tire. Not having a spare anymore, I’m left in a bit of a predicament. I’m not sure how long the tear will hold before it completely blows out – could be 1 mile or the rest of the trip. I’m packing a spare tube, but with a torn sidewall, the tube probably wont last very long either. I decide to pull over and set up camp and weigh my options. Not sure exactly what to do at this point. 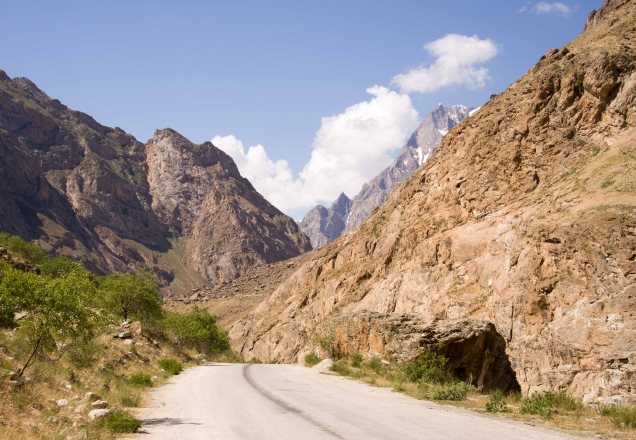 M41- Pamir Highway.  After you get to the middle of knowwhere, you keep going until you drive here… 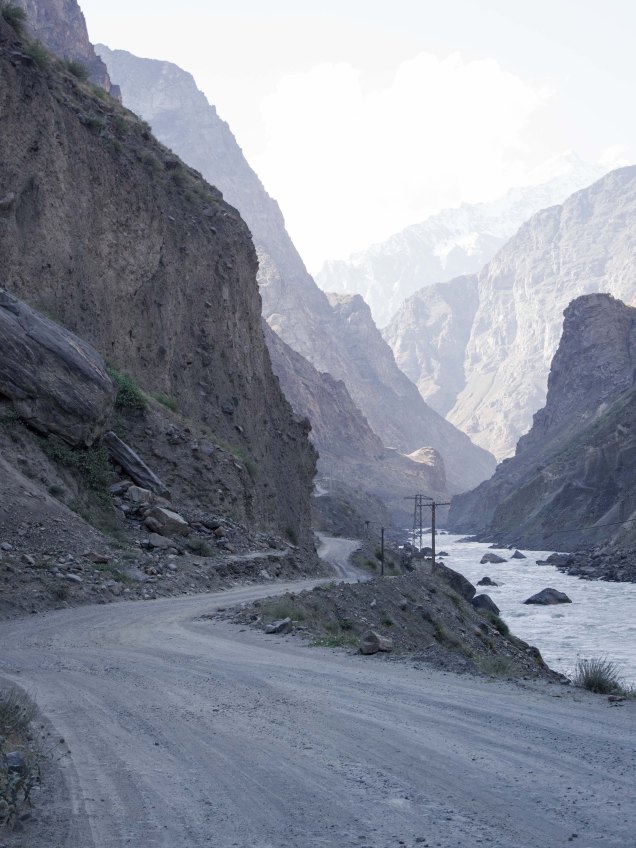 Crossing the pass on M34 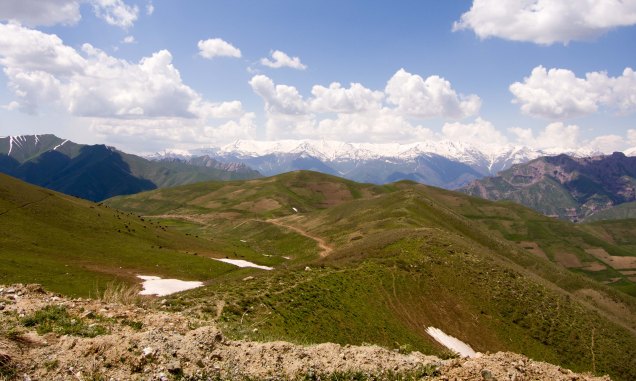 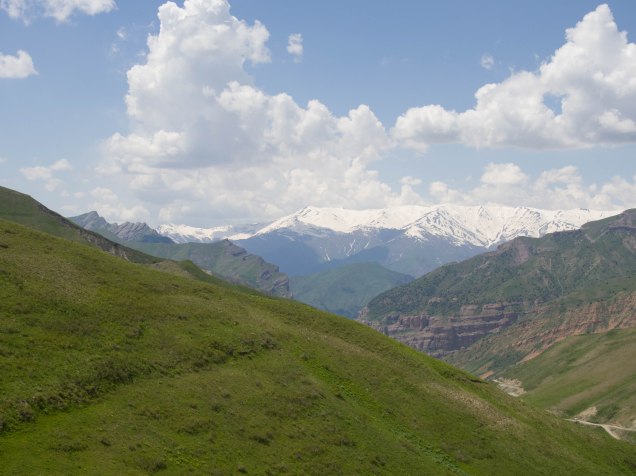 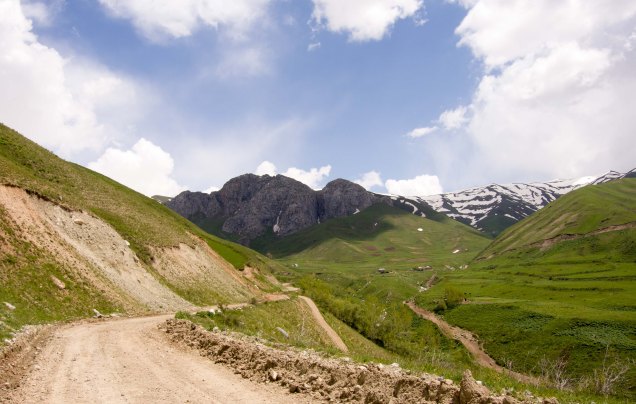 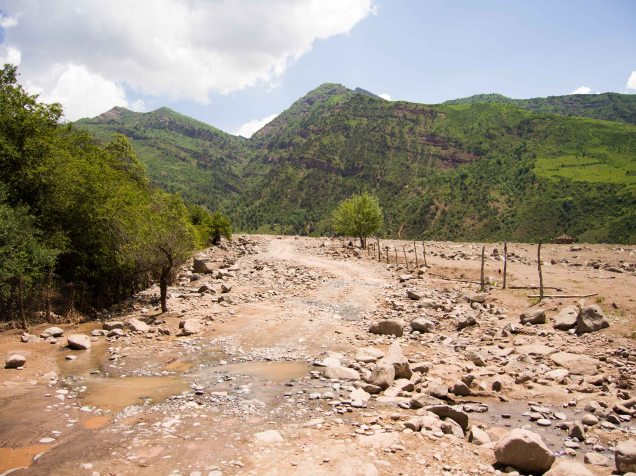 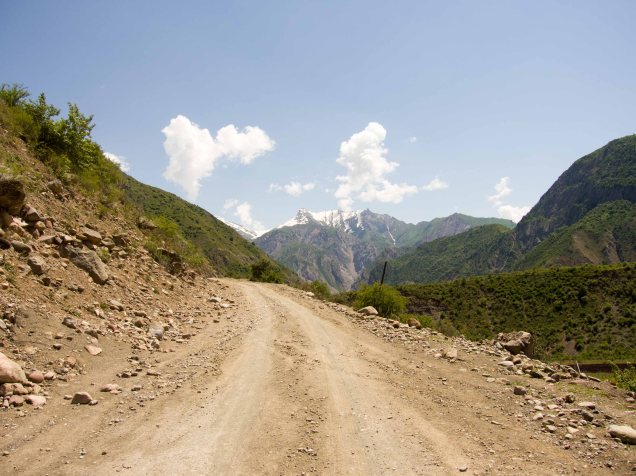